WETNOSE CANINE TRAINING®
Make a wise investment in the future of your dog. 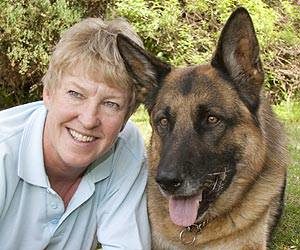 Linda – Diploma in Orthoptics (Wits)
Formal dog training commenced with the purchase of a Dobermann in 1980. At 6 months of age the training commenced at the Alberton Canine Training School and competed in Beginners Class.
The arrival of firstly a Cavalier King Charles bitch and later a dog resulted in the breeding of two litters. The male, Sam, was trained and competed successfully in Class B obedience. He suddenly went deaf and training was converted to hand signals but this was not to the level required for further competition.
In 1985 obtained first German Shepherd – Daisy – and trained at Jolly Dog School. Competed in obedience Class C and working trials TD2 (Tracker dog grade 2) and attended protection work classes with Des Kloeck and Henni Binneman.
Became a trainer at Jolly Dog working with the legendary Norman Phillips.
Phantom, German shepherd male, was next to join the fold – qualified obedience Class A and was taught to track but not competitively. He was joined by a rescue bitch, Shelly.
In 2005, having trained with Beth since 1995 commenced taking obedience classes at her training school. Has been involved with this activity and at the same time in addition to participating with her GSD, Zeno, was a member of the WODAC Obedience to Music display and has trained him to Class C obedience, working trials TD2 and ITT4 (International Tracker Trials level 4), search and rescue and has the WODAC Gold CGC certificate. At the 2011 WODAC, Zeno won the highly acclaimed and testing Canine Survivor competition. Unfortunately Zeno passed away early in 2013 leaving behind his companion Electra a rescued German Shepherd has unfortunately recently passed away. Another German Shepard Renzo Was brought into the home and has been trained to the same hight standard.
Linda has attended courses and seminars by amongst others Roy Hunter, Patricia Holden-White, Sarah Heath, Prof. Raymond Coppinger and on Tellington Touch and dancing with dogs.